The great thing about being in Europe is how close you are to other countries. In some cases you can drive only a few hours and be in another country. And while I was living in Germany I definitely took advantage of that a lot. There are a ton of easy day trips from pretty much anywhere within Europe (check out my post on my favorites from Stuttgart) but sometimes you want to go somewhere that’s too far away and a day trip is not really feasible. Prague in the Czech Republic is about 300 miles from Stuttgart and super fun so it definitely deserves a weekend trip.

This article will cover some of the options you have to fill two days in Praha.

If you are short on time you should definitely put the Prague Castle at the top of your list. Situated above the west bank of the Vltava river, this ancient fortress was founded sometime in the 9th century. Actually a compound rather than a singular castle, Prague Castle is a must see while in the city. 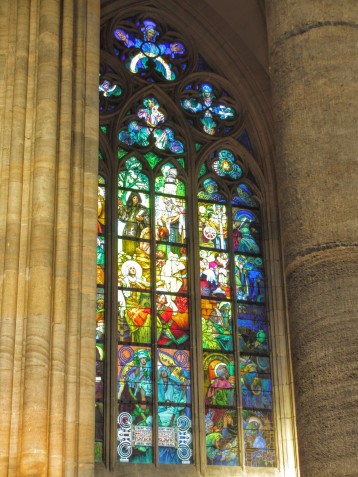 The castle complex is made up of several historic buildings including the Chapel of the Holy Cross, the Saint Vitus Cathedral, the Old Royal Palace, Rosenberg Palace and the cobbled street, Golden Lane. Tickets are tiered depending on what buildings you want to see. Both the inside and outside of these buildings are beautiful but you’ll also have a great vantage point to see the city from high above it.

Below the Castle, stretching over the Vltava river is the Charles Bridge – one of the most recognizable bridges in Europe. Guarded by towers on either end and lined with statues of saints this is one of the most famous parts of the town for a reason. Pro Tip: If you want your pictures to look like all the others you’ve seen on Instagram (read: empty) arrive right at day break. 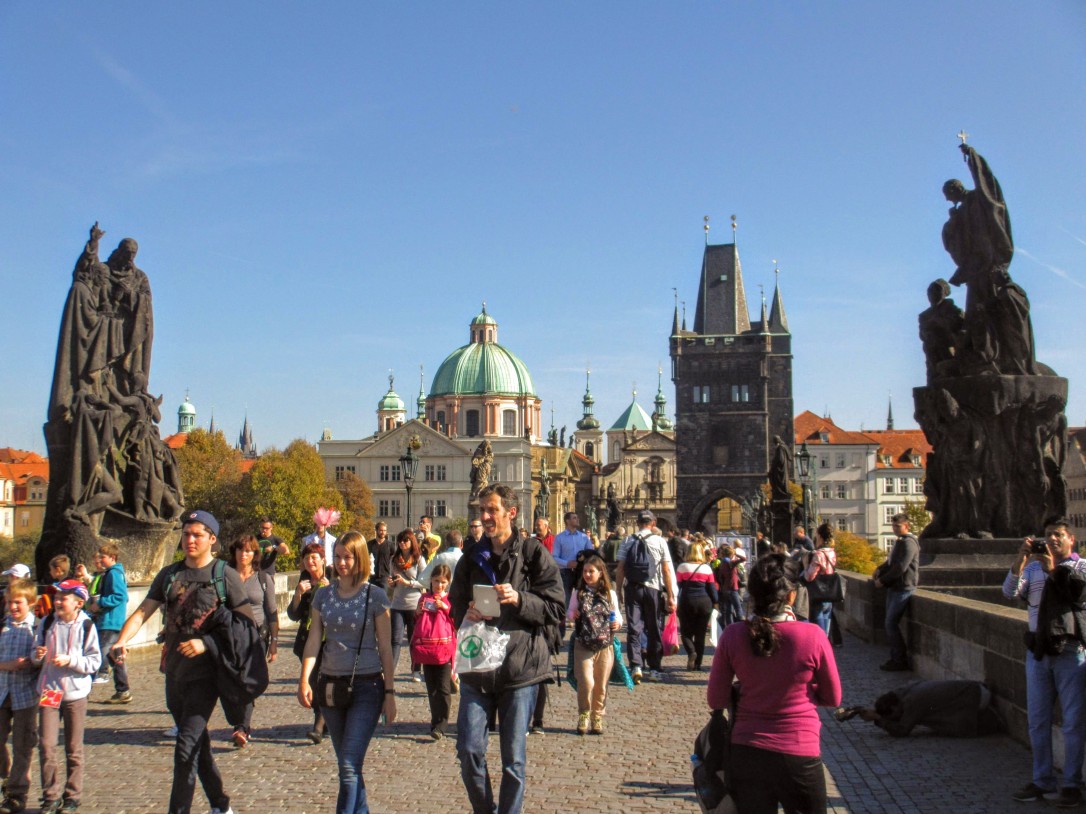 Be Wowed by Strahov Monastery

If I only had a few hours in Prague I would be tempted to skip everything else to see the Strahov Monastery. This is a pretty bold claim but if you’ve ever seen it you’ll understand why. A little west of the Castle, the monastery has quite a history, reaching as far back as 1143. After several wars and fires, the current building was rebuilt starting in 1679.

The main attraction here are the elaborately decorated halls filled with ancient tomes. Imagine mixing a baroque building like Versailles or Neuschwanstein with the New York Public Library. If you’ve got chills, you have to see this place. While you’re there be sure to check out the Cabinets of Curiosities in the connecting hallways. They were purchased in 1789 and are filled with collections of the “mysterious and remarkable”. Definitely worth a peek.

View of Prague from Strahov Monastery

View of Prague from Strahov Monastery 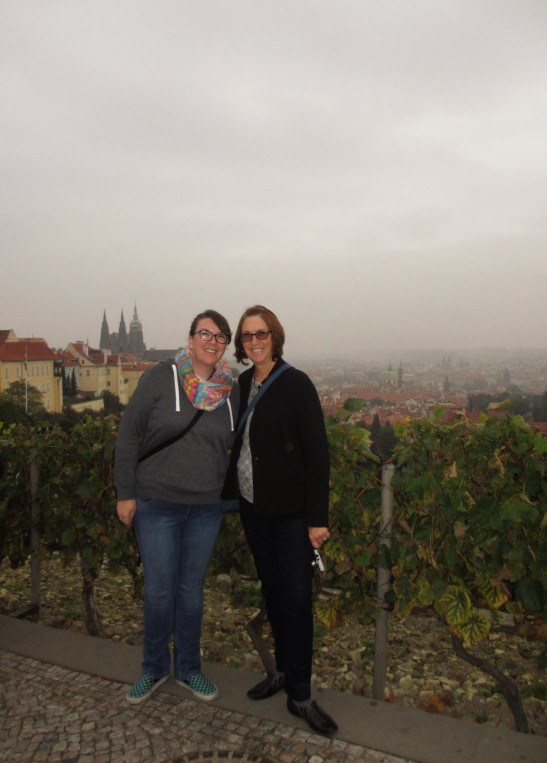 Have you ever noticed how often clocks are Instagrammed? There are over four hundred thousand tags just for ‘clock tower’! Anyway, you’ve probably seen pictures of the Astronomical Clock in the Old Town square anytime you google Prague. It’s over 600 years old and tracks the movement of the sun and the moon as well as the time. At each hour the two windows at the top of the clock open and figures on a circular track can be seen as they rotate by the opening. Four figures next to the clock face also move during the show. 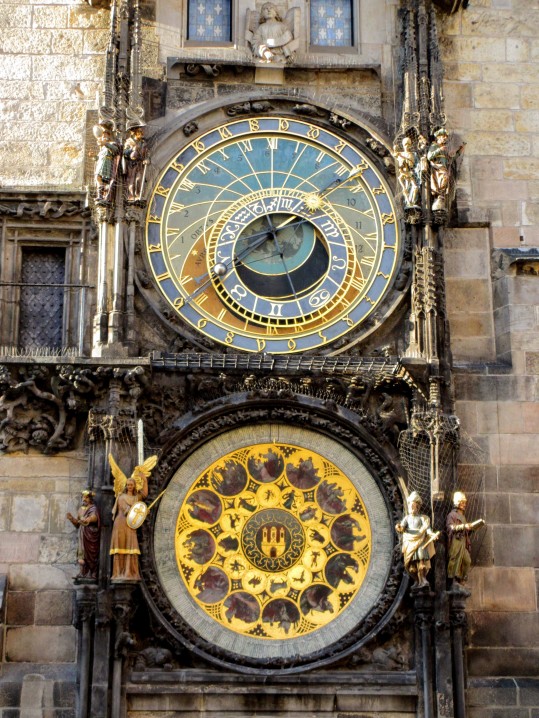 After checking out the clock stroll the rest of Old Town Square. It’s a beautiful, traditional European square with the classic Prague art nouveau touches. In fact, the majority of the city is filled with this style of architecture – bright colors and gold glinted details. Definitely one of my favorite things about the city.

Church of Our Lady before Týn from Old Town Square, Prague

Prague has one of the oldest Jewish communities in Europe. At one point it had the largest population of Jews anywhere. After years of prosperity in the city (even though they were exiled twice) their numbers were drastically diminished when they were rounded up and sent to prison camps during WWII. Today there are only a few historic buildings remaining in the Jewish Quarter. In the Quarter you can also visit the cemetery that is literally so full of graves they are stacked twelve deep and the tombstones are smooshed up against each other. Out of the Quarter there are two other synagogues worth visiting – the Spanish Synagogue with an interior dripping in gold and the Jubilee (Jerusalem) Synagogue with a bright and colorful exterior.

Pro Tip: All synagogues, and the buildings and cemetery in the Jewish Quarter close on Saturdays and Jewish holidays. It’s super important to check the calendar before you schedule your visit. I knew they would be closed on Saturday so we planned to visit on Sunday but didn’t realize that Sunday was a holiday. We completely missed out on seeing these buildings on the Friday we could have because of poor planning. Don’t be me.

Not only is Prague one of the most beautiful cities I’ve been to, it’s also one of the strangest. As you’re out walking around the neighborhoods you’ll undoubtedly find outdoor sculptures that can only be described as ‘odd’. One might expect bronze statues of notable historical figures or war memorials when exploring Europe but never before have I seen a 10 foot tall, rotund lady made from stacks of polished silver.

Where to Eat & Drink

Prague is a city that is not lacking in dining options. And you’ll find a good mix of traditional and not so traditional restaurants. My favorite thing about Prague was how much they embraced the themed restaurant. It wasn’t overly done or cheesy, it just had a theme and design and decorations as well as server uniforms matched that theme. We had fish and chips in a London themed restaurant across from our hotel and a lovely seafood lunch in a nautical themed place down the street. We even found a vintage airplane themed bar called the Hangar Bar (think: Andrews Sisters vibe).

Don’t judge my choices just yet, I actually do like to check out traditional food wherever I travel as much as possible. Check out Mama Lucy around the corner from the Old Town Square. Rustic decor, reasonable prices and huge portions.

Visiting Prague was definitely an adventure. It was my first time visiting an Eastern European country, and I loved it. It’s relatively inexpensive, there’s a good public transportation system, they have their own currency (something I like to collect), the locals are friendly, what more could you ask for? I can’t wait to go back with more time as there are so many lovely places to visit in the Czech Republic and elsewhere in the former USSR.

Where have you traveled that has surprised you? Let me know in the comments!