It’s safe to say that most people enjoy food. Whether it’s a home cooking class or looking for the most authentic spot in the city you’re in, trying a new restaurant when traveling is just part of the fun. I usually hit up yelp when I’m trying to plan where to eat in a place I’ve never been to, but on a recent wine tasting trip to the Guadalupe Valley in Baja California, my parents had planned on us having dinner at a restaurant called Deckman’s. When we were planning out our day they told me they had heard about Deckman’s from friends, all of them saying how great it is. We looked at the website, finding some impressive information about the chef – he has a Michelin Star – and information about how they responsibly source the items on their menu. All of this sounded pretty great, but it definitely did not prepare us for the incredible meal we were about to have. Without a doubt, Deckman’s is one of the best dining experiences I’ve ever had. Maybe not be ‘best thing I’ve ever eaten’ worthy, but definitely needs to be shared with everyone I know.

Chef Drew Deckman spent 10 years in France, Switzerland and Germany cooking with Gastro-Masters such as Paul Bocuse, Jacques Maximin, Gilles DuPont and Tommy Byrne. Drew was awarded a coveted Michelin Star for his work in Restaurant Vitus in Germany as well as Rising-Star Chef in Berlin in 2003 during his tenure as Executive Chef at the Four Seasons Berlin (17pts Gault Millau) and in March 2014 was Host Chef of James Beard Foundation: Baja meets NYC Dinner. After mentoring under star-teacher and cookbook author Madeleine Kamman, Chef Drew was part of the final class of the School for American Chefs at Beringer Vineyards. He has worked all over the world and now calls Baja California home. Drew is dedicated to local, sustainable ingredients, is Regional Governor for Slow Food International, and has been the culinary consultant for Casa de Piedra Winery, Paralelo Winery, Estacion por Venir Winery and La Contra Vinos. Chef Drew is also an active participant in various Culinary Festivals and Events including the Baja Culinary Fest, Baja Bash, and Chefs al Rescate.

Deckman’s is located in the Guadalupe Valley inland between Rosarito and Ensenada in Baja California. It sits on a farm called El Mogor, from which they harvest grapes for wine and the vegetables, herbs, lamb, olive oil, and eggs served at the restaurant. They also source all fish and seafood from Baja, their salt comes from San Felipe (on the east coast of Baja), their cheese comes from other local farms in the Guadalupe Valley.

Just about everything used at the restaurant has been recycled or gets recycled after use. The restaurant is mainly outside, the only ‘inside’ area is an open ended covered patio of sorts made from adobe covered hay bales. The tables and chairs look like they were hand built, the water glasses are cut from the bottoms of the bottles they serve water in. Wine bottles are reused as vases at the tables, and hung from the window opening in the adobe. The place mats are denim, probably recycled from old jeans. All the cooking is done in an open kitchen, over an open flame and cooked to order. They even cook the tortillas on a iron contraption that looks like a three-tiered flat banana basket, hanging over the fire and bring salt on tiny abalone shells. Every aspect of the running of this restaurant has been thoroughly thought out about to make it sustainable.

The menu is not listed on their website so I suspect that what they serve changes depending on the season and availability, as they source from local farms. This is what we had on our visit in July 2018.

We came to Deckman’s after a day of wine tasting in the valley, and although we had planned to be we were not super hungry by the time we arrived at the restaurant. So we decided to order what we thought would be smaller portion items on the menu. The menu had a good mix of meat dishes like steak and quail and fish dishes. 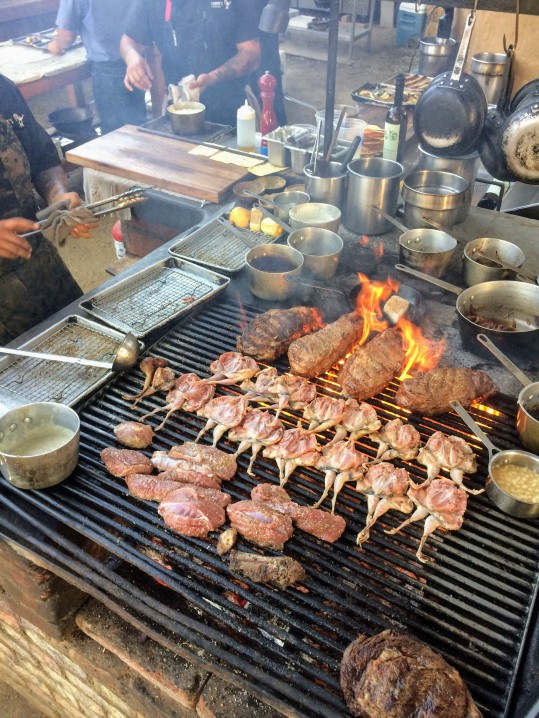 For our appetizer round I chose the striped sea bass ceviche with gooseneck barnacles and my parents decided to go with the oysters which are grown in the Guerrero Negro Lagoon. The ceviche was served in a cold soup / broth almost like a gazpacho. The oysters were so good I discovered that I actually like oysters. I’ve had a lifelong distaste to them after eating them once and deciding they were gross. It had been so long since I’d actually eaten one that I don’t actually have a real memory of it anymore. Long story short – these oysters were amazing and will turn you. 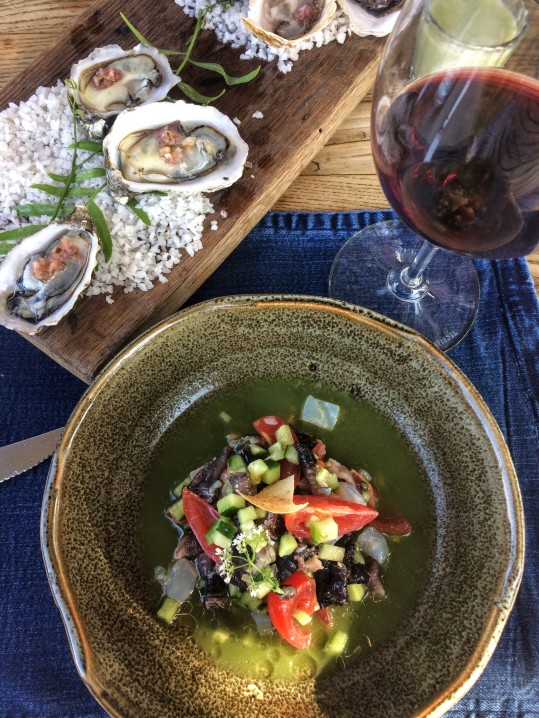 My mom ordered the spider crab and my dad went for the beef bone marrow for their main courses. The spider crab was beautifully presented layered with fried wonton squares. Even though they were on the appetizer menu, the plate of bone marrow was piled high with beef bones and fluffy Italian bread. If you’ve never had bone marrow, I’d suggest trying it – it’s such a rich and unique flavor. I decided to go with the mussels, which was an actual entree so was a pretty big portion. Served piled high in a shallow dish with a light tomato sauce, garlic and spinach, my favorite shellfish dish did not disappoint. 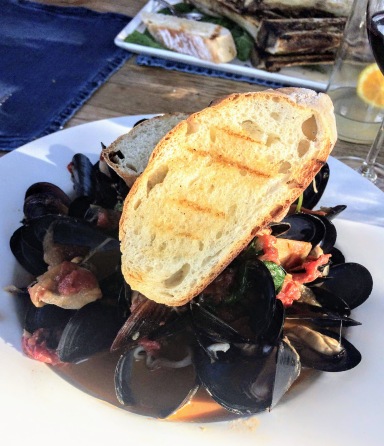 I mentioned how we were not totally starving before arriving at Deckman’s but after eating such a delicious meal we couldn’t turn down desserts – even if we were now sufficiently full. I went with the chocolate truffle, garnished with crushed pralines and whiskey ice cream. My mom chose the lemon custard – sitting on a circle of toasted marshmallow swirls and topped with flowers and ice cream. Finally my dad ordered the flourless chocolate cake topped with chocolate sauce with a side of chocolate ice cream. After a spectacular meal, these desserts were terrible! Just kidding – they were delicious! The perfect ending to a memorable dinner. 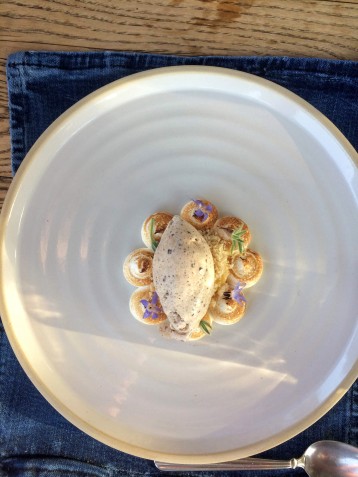 When you travel there tends to be a handful of events that stick with you. Whether it’s a piece of art that really spoke to you, a thrilling ride somewhere exotic, or meeting some really awesome people in a new city. Sometimes it’s as simple as a really good meal. One of my favorite experiences up to this point also involved a meal, so you could say that I find eating a really important part of travel. And life.

What’s the best thing you’ve ever eaten? Tell me all about it in the comments!