Korean summers are insanely hot and humid. Even coming from California, I could not handle the heat. Almost every day it was 90 degrees with 70% humidity and then out of nowhere there would be a torrential downpour that just made it even hotter. Luckily, being a peninsula you can find easy relief from the soaring heat by taking a trip to the beach.

Busan is a huge city on the east coast of Korea. Thanks to the superb public transportation in Korea, it’s an easy two hour trip on the Korea Train Express (KTX) bullet train from Cheonan-Asan station.  Travel in Korea is also extremely cheap, even the bullet train only cost about $40 round trip. You can also choose to take the regular train or bus if you are looking for an even cheaper option. Just be sure to check the travel time – the trip gets longer the lower the price of the ticket.

Korea has a ton of accommodation choices, from swanky hotels to hostels (sometimes called guest houses). We stayed at the HiKorea Hostel. Located on an upper floor in a high rise building, the hostel is clean, bright and features built in bunk beds with personal lamps and privacy curtain in each bunk. Free wifi and breakfast and about a fifteen minute walk to the beach, it was a great place to crash.

Pro Tip: There is a different type of rental Americans may not be used to called a pension. It’s usually a room that multiple people share and sleep in the traditional Korean style, on mats on the floor. Korean homes usually have heat running underneath the floor instead of having a wall unit like we are used to in the US.

Korean beaches come equipped with many ways to keep cool including renting an umbrella to stay out of the sun and inner tubes to float in the water.  The ocean was about 65*F, so it takes a few minutes to get used to it, but since it’s so hot on the sand, the water temp evens out your body temperature and makes it very pleasant to be in for extended periods of time.  The beaches are crowded and so is the water but once you get out on your inner tube there’s not much to really care about.

Koreans take extra precautions when it comes to the sun. People get in the water wearing button up shirts, sweatshirts with the hoods up, jeans, even running shoes and socks. And since Korean youth is highly concerned about their social media status updates, they sell waterproof bags to put their phones in and you’ll see people taking selfies in the water. 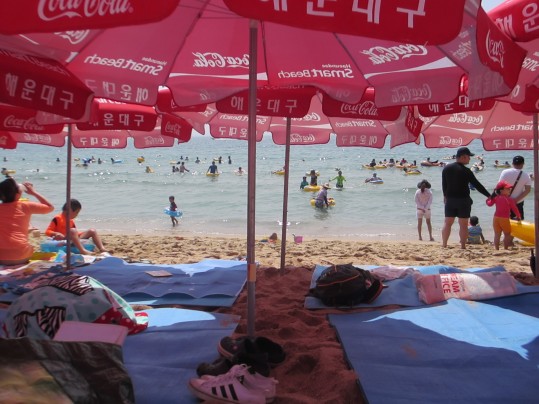 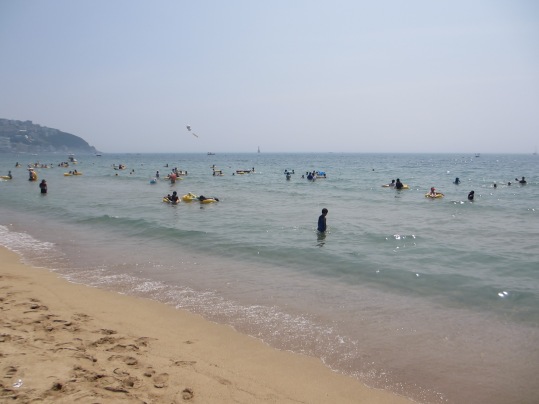 Near the beach there are plenty of restaurants and bars so you can bring your bucket of chicken from the KFC and beers from the Sun 24 on the beach to enjoy. There’s no law against drinking on the street or on the beach. After you’ve soaked up enough sun the clubs are open late and of course Norebong (Korean karaoke) is always an option. We found one on a higher level of a building right off the beach.

This beach weekend with my American coworkers was so much fun. It was crazy hot, crowded, and I still went to sleep way too early (according to them) but it was a blast. The nice thing about being in a small country is that it’s really easy to travel around. And Korea is actually a really beautiful country with every kind of land formation, from mountains to forests to beaches, even an island. So there’s plenty to explore.